Wood decay, also known as wood rot, is the decomposition of wood as the result of actions by certain species of fungi. 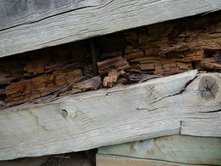 How does wood decay happen? 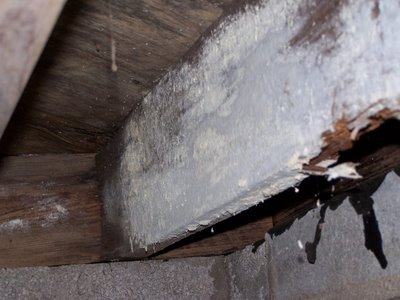 temperature and humidity and, under adverse conditions, they may go dormant for long periods. Spread primarily by air currents, they collect on horizontal surfaces. Decay fungi feed on the cellulose and lignin of which wood cell walls are composed. Their hyphae, which are threadlike tubes that penetrate the wood, secrete enzymes which dissolve at least part of the wood cell being fed upon, changing it into a form which can then be absorbed as food. Spores require a moisture content higher than the Fiber Saturation Point (FSP) of the wood species upon which they rest, typically between 27% and 30%. Once sufficient water and favorable temperatures are available, spores germinate and develop by extending a hyphal tube. As more spores germinate, fungi multiply to form a colony. Under the right conditions, colonies can expand quickly.

Inspectors should check any areas suspected of containing decay by probing. A screwdriver works well for this. Wood with advanced decay will be soft and the probe will penetrate easily. Areas with incipient decay may be a little trickier to identify.

The pick test can also be used to identify decayed wood. To perform this test, a pointed tool, such as an ice pick, is inserted beneath the wood grain to pry loose a thin section of wood till it breaks free. Sound wood will snap crisply and typically breaks off to one side of the pick. Decayed wood will break with a dull sound and usually breaks above the pick’s point of insertion.

Although wood-destroying insects, such as termites, are attracted to decayed wood, they also inhabit sound wood. Always probe or use the pick test to confirm that what you’ve found is sound wood.

Moisture can come from:

In summary, wood decay is caused by fungi that are attracted to wet locations.