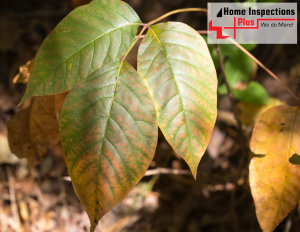 The Dangers of Poisonous Plant Species

In almost all suburban and rural regions of the United States and Canada, home owners run the risk of developing potentially debilitating, allergic symptoms from exposure to urushiol-secreting plants. This potent, clear oil causes an itching rash (called contact dermatitis) in 350,000 people each year, but these numbers can be reduced through education and by taking appropriate precautions. Exposure can put sufferers out of work for days or weeks, and may even require hospitalization.

Inspectors at Home Inspections Plus have learned to identify these plants, and you should too  — especially the top three offenders: poison ivy, poison oak and poison sumac — and protect themselves and their clients from the dangers lurking in yards across North America.

Urushiol oil is potent — just 0.25 ounces of the allergen is sufficient to cause a rash on every person on earth, according to the Poison Ivy, Oak and Sumac Information Center. The oil begins to penetrate the skin within minutes after contact, but the rash usually takes 12 to 72 hours to appear, at which point the person experiences severe itching, redness and swelling, followed by blisters. While the rash appears to spread, it is not contagious, but it will continue to grow due to differing rates of the immune system’s response to the oil.

A few other important facts about urushiol oil:

The Three Most Notorious Allergenic Plants in North America

accounts for the majority of contact dermatitis resulting from urushiol oil.

Regardless of its form, alternating clusters of three almond-shaped leaves that range in color from light to dark green, turning red in the fall, easily Poison oak, red with fall and spotted black from air-exposed urushiol oil distinguish poison ivy. Its leaf surfaces are smooth and become shiny with maturity, and their edges may or may not be ridged. Poison ivy vines have no thorns.

is a highly poisonous woody shrub or small tree. Although its rarity reduces the incidence of human exposure, the plant is far more virulent than other urushiol-secreting plants.

In summary, urushiol-secreting plants should be studied and prepared for to avoid painful allergic reactions. Home owners should be aware of the outdoor foliage that grows around their house, and wear long-sleeved shirts and pants to avoid the risk of exposure to poisonous plant life. Homeowners should also take steps to remove those dangerous plant species that threaten the health of family members.

Caring For Your Gutters and Downspouts

FAQ for Home Buyers and Sellers

Choosing the right home inspector can be difficult. When you hire Home Inspections Plus we guarantee that we will give you our very best effort. Schedule your inspection with us today!
Get Started Now