Wind turbines are structures that capture the wind’s kinetic energy and convert it into electricity. 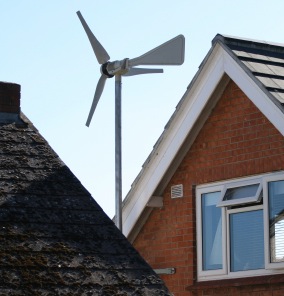 The basic method by which turbines produce electricity is quite simple, and inspectors may want to familiarize themselves with these increasingly popular constructions. Turbine blades are shaped in such a way that wind causes them to rotate, which then makes a chain of shafts and gears turn. A magnetic rotor in the generator housing spins along a shaft within loops of copper wire bound around an iron core, which generates an electrical current. After this direct current is converted into alternating current, it can then either power a house or be sent into the electrical grid, depending on local net metering laws.

Wind turbines designed for residential use — sometimes called microturbines — are typically much smaller in size (both in height and rotor diameter) than their commercial counterparts, as well as their power output. The largest commercial wind turbine is Germany’s REPower 5MW.  At 600 feet tall, it is nearly twice the height of the Statue of Liberty and can power 5,000 homes. Microturbines, by contrast, rarely produce more energy than is required by a single home. As of 2009, the United States ranks first in the world in wind power capacity, followed by Germany, China and Spain. Denmark ranks ninth in the world in wind power capacity, but generates about 19% of its electricity from wind. Wind power in China increased twenty-fold from 2005 to 2009.

In summary, wind turbines are available in several designs for residential and commercial use, although they have their drawbacks.